Each IIT is an autonomous institution, linked to the others through a common IIT Council, which oversees their administration. The IITs usually offer many degrees starting from B.Tech to Ph.D.

The IITs have a common admission process for undergraduate admissions.It was based on IIT-JEE,replaced by Joint Entrance Examination in 2013.The graduate level program that awards M. Tech. degree in engineering is administered by the older IITs (Kharagpur, Bombay, Madras, Kanpur, Delhi, Varanasi, Guwahati, Roorkee). M.Tech. admission decisions are made on the basis of Graduate Aptitude Test in Engineering (GATE). In addition to B. Tech and M. Tech programs IITs also award other graduate degrees such as M.Sc. in Engineering, Maths, Physics and Chemistry, MBA, PhD and more.

Admission to these programs are through Common Admission Test (CAT), Joint Admission Test to M.Sc. (JAM) and Common Entrance Examination for Design (CEED). IIT alumni have achieved success in a variety of professions. IITs are Institutes of National Importance established through special acts of Indian Parliament.

Below are the list of IIT's along with their Integrated courses offered. 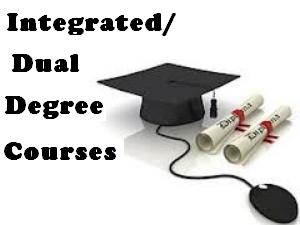