News
oi-Adarsha
By Adarsha St
The Common Law Admission Test (CLAT) core committee members relaxed the upper age limit for Physically Disabled (PWD) candidates by two years. In other words, in order to appear in CLAT 2013 and be eligible for admission to the UG programs offered by the Various national Law Universities, PWD candidates must not have attained the age of 22 years as on July 01, 2013.

Earlier, the age limit fro PWD candidates was restricted to less than 20 yeas as on July 01, 2013.

Only 5 days left for the last date for submission of application for CLAT 2013, the PWD candidates are strongly advised to apply through online so that the applicants could be submitted instantly. 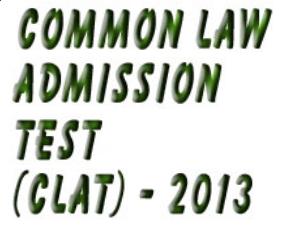 The Common Law Admission Test (CLAT) is an all India entrance examination conducted by 14 National Law Schools / Universities for admissions to their undergraduate and Postgraduate degree programmes (LL.B and LL.M) commencing on session 2013.

Only 12,581 out of 28,501 applicants have paid the fees and successfully submitted their applications. The remaining 19,920 registered applicants are at different stages of the application process.