Hanan, the woman behind a motivating teacher

Hanan Al Hroub recently won the Global Teacher Prize from the Varkey Foundation for her outstanding contribution for the improvement of education for the children who are deprived of privileges which they deserve. She grew up in the Palestinian refugee camp in Bethlehem, where she used to witness violence every day.

A shooting incident seen by her children proved a U-turn in Hanan's life. The incident took place when her children were returning from school and their tender hearts were gripped by prolonged fear. It was then that Hanan decided to enter primary education.

She began her research from home by understanding the psychological tumult her children went through during and post that shooting incident. She remained undeterred during her journey of research throughout which she studied her children's behavior, personality development and academic performance. Hanan, having spent her childhood amidst violent atmosphere, understood that there are other children like hers who are in need of such psychological assistance and special care at schools. [Also read: Behaviour modification among children in the classroom]

At present, every day seems to be a challenging day for Hanan when she enters the classrooms packed with violence-hit children. So what keeps her mind positive and high in spirits? She does not believe in violence at all, which she has very clearly mentioned in her book 'We Play and Learn'. She strongly believes in developing a relationship woven with trust, respect, honesty and affection with her school kids. Hanan motivates her students to study and play together, caters to each and everyone's needs and gives rewards to students who show positive signs in their daily conduct. [Also read: Raising children without TV: Good or Bad?]

So, has her approach of non-violence towards violence-hit children worked? Yes, the children have stopped behaving violently at schools and her colleagues are also following her footsteps while teaching the tender minds.

Hanan has been sharing her thoughts on education for the troubled kids during several meetings and teacher training seminars. 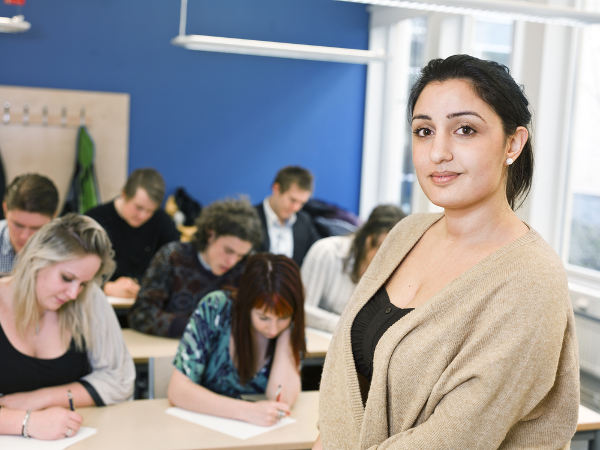 How can teachers motivate their students?

"We just want peace; we want our children to enjoy their childhoods in peace."

Though short, the statement transforms into a universal message to many of the teachers, parents and students of all ages across the globe as it does not talk just about violence during wars or battles, it talks about violence of any kind can traumatize a child which is sure to throw the future of that child as well as a nation into darkness. Such kids need special care and mentoring to bring their life back on track so that they can rebuild their myriad dreams for a promising future. That is when education and people involved in it can emerge successful.

Hanan Al Hroub was named the 'world's best teacher' and was awarded Global Teacher Prize at an event in Dubai which comprised $1 million. Varkey foundation believes that the story of this teacher par excellence will inspire those individuals who want to enter the teaching profession.