Mahatma Gandhi also called as the Father of India is popular across the world for introducing non-violence to achieve the objectives. This is the reason why the United Nations General Assembly passed a resolution to celebrate the birth anniversary of Mohandas Karamchand Gandhi as the International Day of Non-Violence, October 2.

The personal life of Gandhi is an inspiration to many youngsters. Students can start their Gandhi Jayanthi speech with how a barrister, whose knees trembled while making his first speech in the London court, stands on top in the Indian National Movement. One can take up some examples and add in their Mahatma Gandhi speech.

Students will be acclaimed for their concepts in speech. If you develop a speech about ''Gandhi's message to the youth of modern India,'' every student including teachers will pay special attention while delivering a Gandhi speech.

Bapu led many movements to bring the British flag down in the country. Students can prepare their Mahatma Gandhi speech on some of the Gandhi movement for Independence such as Non-Cooperation Movement in 1920, Dandi March in 1930 and Quit India Movement in 1942.

Candidates can collect all the important quotes of Gandhi and include the same in their Mahatma Gandhi speech on Gandhi Jayanthi. However, students should explain the quotes by providing some examples.

The International Day of Non-Violence is celebrated on 2 October to commemorate the birth anniversary of Mahatma Gandhi. One can take up a speech on why the United Nations General Assembly decided to keep non-violence day on Gandhi's birthday.

The principles of Gandhi to follow are not easy and require a lot of commitment and dedication. One can develop Gandhi Janaythi speech with some Gandhi principles such as speaking only truth, not eating meat and keeping greed at bay. 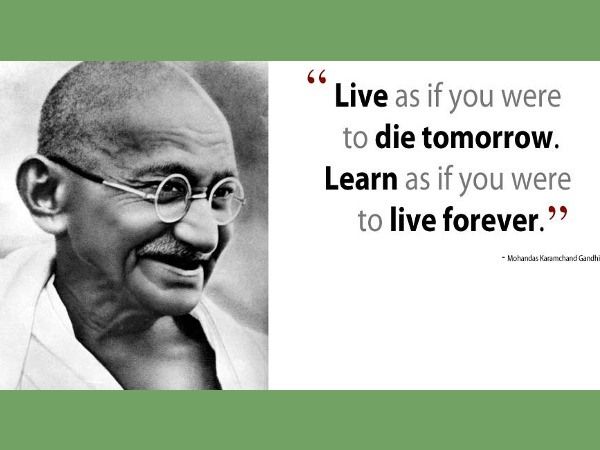